ZZ Top is a blues/rock band formed back in 1969. The members of the band are Billy Gibbons, Dusty Hill and Frank Beard and the band is especially known for their long beards.

When the members of ZZ Top a few hours before the concert were asked if they wanted to plant a tree, there were no doubt that the trio from Texas was on board.

- That could be real fun, the band answered while chilling backstage in the sun.

- It is a great idea you’ve had, Aalborg, and it really looks wonderful, Dusti Hill said looking at pictures of the park while getting ready for the concert.

Unlike many other bands, the three characteristic musicians have remained together since the band formed in 1969. 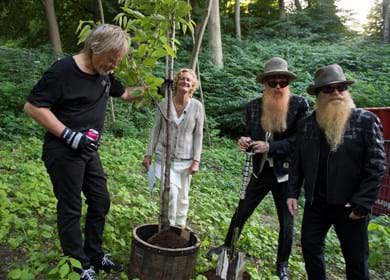